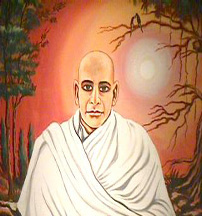 Among the few who were eminent in building India in the later part of the 19th century and the early years of the tewntieth, was Mahatma Munshi Ram, known as Swami Shraddhanand. As a valiant warrior of the war of independence, Swami Shraddhanandji presents a living portrait of bravery and sacrifice.

Swami Shraddanand Saraswati was born at Talwan (Jullundur) in 1913 (Vikram Era) corresponding to 1856 A.D. in a well-known and well-to-do khatri family. His father, Shri Nanak Chand, was in the service of the East India Company. Swamiji was originally given the name of 'Brihaspati', but later, he was called Munshi Ram by his father. This name continued to be in vogue till he was initiated into 'Sanyas'. He was youngest in the family. His school education began in Varanasi and ended in Lahore after passing the examination for law . He was married to Shrimati Shiva Devi. His wife died when he was only 35 years old and left behind her two sons and two daughters. Munshi Ram had started law as a Naib Tehsildar but he relinquished this post after a short time. Later, he practised as a lawyer at Phillaur and Jullundur, but gave up this lucrative profession also when a call came from Swami Dayanand Saraswati to serve the Arya Samaj, an appeal that he found irresistible.

He promoted movement for education of girls in the right earnest. As a matter of fact, when he saw his own daughter, Ved Kumari, coming under the influence of Christianity while studying in a Christian Mission run school, he made up his mind to wean away children of his compatriots from the external influence by providing them good education in schools run by the Arya Samaj. Like-minded Indians came forward to support him and the educational mission was a roaring success. He founded the first Gurukul on 16 May 1900 at Gujaranwala in the West Punjab, now in Pakistan, a unique seat of learning in keeping with the ideals of the Vedic seers. Later, the Gurukul was moved to Kangri near Haridwar opened. The underlying idea was to produce good and disciplined citizens in the community completely imbued with ancient Vedic ideals and a national outlook. Only a man of patience and perseverance, grit and determination of a high caliber could have done it. And he did it. This is the institution which Ramsay Macdonald visited and where he likened Munshi Ram to a biblical prophet walking the shores of Galilee. This is also the institution towards which Mahatma Gandhi was first drawn while he was in South Africa and where he stayed first on his return to India. It was this institution which conferred on Gandhiji the title of the 'Mahatma'. In 1962, The Government of India declared the Gurukul as a full fledged university (Mahavidyalya).

In the year 1917, Munshi Ram became a 'Sanyasi', assuming the name 'Shradhanand' and making Delhi his permanent home instead of Gurukul. In Delhi, he founded a number of institutions aimed at social, moral and cultural betterment and to uplift prople, especially the so-called 'untouchables'. He also founded two prominent newspapers: the Urdu 'Tej' and the Hindi 'Arjun'.

During the national struggle for independence in the year 1919, he plunged headlong into the agitation under the leadership of Gandhiji. He motivated millions of men and women to join the struggle for independence of India from the British yoke. His towering image, both moral and physical, moved the masses. The masses comprised of all classes, all castes and creeds, regions and religions. This mahatma was the magic man, although he himself believed in no magic. He took a leading part in infusing life into the people and organised 'hartals' and protests against the Rowlatt Act enacted by the British Government. When Gandhiji was arrested, Swami Shraddhanandji led a protest march in the city. When a soldier threatened to fire upon the crowd, the ascetic bared his breast and dared him to shoot. Such was the courage of Swamiji. During the period of excitement, this valiant Arya Sanyasi, without any distinction of caste or creed, served the citizens of Delhi. The Muslims considered him as their own elder brother. Swamiji was accorded the unique honour of preaching to the Muslims from the pulpit of the greatest and the most famous mosque of India, the Delhi Jama Masjid.

When the Punjab was writhing under the pains of atrocities by the British Government under martial law, it was Swami Shraddhanand who came forward to make arrangements for the Congress session at Amritsar. In this historic session, he introduced the programme for eradication of untouchability that was adopted. He always stood in the front line of the Arya Samaj movement and made the Arya Samaj a power and contributed to its popularity by his disinterested work and examplary practical life. His towering and inspiring personality was a source of eternal inspiration. He believed in Hindu-Muslim unity from the very begining and was a close associate of Mahatma Gandhi. As a social worker, he was always engrossed in improving the conditions of the poor and the down-trodden.

God willed for him a martyr's death. Long ago, Malkana Rajputs in the Mathura-Agra area had been forced by the Moghuls to convert to Islam. Yet they had retained their cultural distinctiveness. Swami Shraddhanand Saraswati saw a golden opportunity to encourage them to return to the religious fold of their forefathers. The mission of Shuddhi of the Malkana Rajputs was a roaring success, notwithstanding strong opposition from many political leaders. It infuriated many Muslims. While still on his sick bed, he died at the hands of a misguided Muslim assassin on 23rd December 1926. His message from his sick bed was, "India's salvation lay in abiding Hindu-Muslim unity". In the words of Mahatma Gandhi, "He lived a hero and died a hero". His life was symbol of renunciation and penance. His field of action was limitless. The Posts and Telegraphs Department of India released a special commemorative stamp on March 30, 1970 to honour Swami Shraddhanandji , a noble soul and fearless patriot, and one of the greatest sons of India.

This article has been compiled from the following articles. First one is on the occasion of release of a commemorative stamp by the Post and Telegraph Department of India. And the second is The Martyr Mahatama By Brigadier Chitranjan Sawant,VSM on Arya Samaj website. Please read the original articles at: