Arya Samaj has instituted a food distribution program for members of community adversely affected by the pandemic.  For details, click on the announcements button on left. For schedule of  online ASGH Services, please click here. All on site services of Arya Samaj Greater Houston have been suspended till further notice because of cronavirus pandemic.

As a staunch follower of Swami Dayanand Saraswati, Shri Ram Chand Ji Mahajan affectionately remembered as Pita Ji, came to the U.S.A. in 1979 to join his eldest son and his family. Immediately he became active in the workings of the Hindu community in Houston as well as across U.S.A. He would visit people’s places to perform yajna and talk to them about the vedas. Pita ji wanted to establish a center where families could meet to perform traditional Vedic Yajna and inspire their American-born children to carry on the beliefs, practices and family values of Arya Samaj.

The vision took birth when he met with philanthropist couple Mr. Sunil Mehta and Mrs. Rita Mehta. Believers in vedas and followers of Swami Dayanand gave their commercial store space for exclusive use of the Arya Samaj, which started as a gathering of friends and families to conduct yajna and sing bhajans. 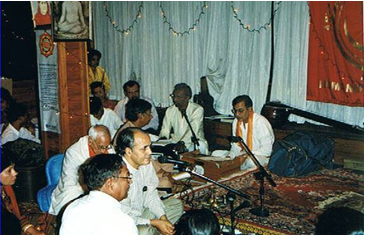 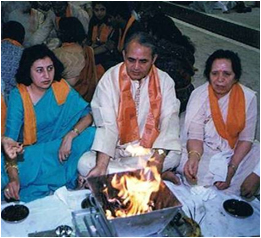 Pitaji answering a question, "Is education and knowledge of Vedas only for adults?" gave rise to opening of DAV School in 1994. He knew there were a number of excellent schools in the community to offer formal education, but none to teach our children about their heritage and culture. With the continued support of Mehtas, who opened another building space, the school opened its doors with six students. It was run by volunteer Acharya ji, volunteer parents providing instruction in Hindi, Music, Naitik Shiksha, History and Culture.