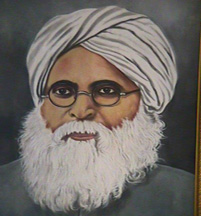 Without doubt the largest non-governmental educational organization in the world is the chain of Dayanand Arya Vedic schools and colleges spread over the length and breadth of the country. To date it has 669 colleges, schools, professional and technical institutions. Hundreds of thousands of boys and girls owe their career to this multi-faceted set-up. Believe it or not, they owe their achievements and status to a frail young man of very modest means, who decided to dedicate his entire life to the cause of education. He was like a tiny seed from which sprouted a mighty banyan tree, which dropped its branches to sprout more banyans till they covered the entire country.

This young man was Hans Raj who soon came to be known as the Mahatma. The two Mahatmas, Gandhi and Hans Raj, had a lot in common: both were slightly built with enormous inner strength, both came from trading families. The Gandhis were banias; Hans Raj was a Khatri whose family was in money-lending. What Mohan Das did by leading the country from foreign bondage to freedom, Hans Raj did by leading the country from the darkness of ignorance to the enlightenment of knowledge.

Hans Raj was born in a small town, Bajwara, in district Hoshiarpur in 1864 (five years before Mohan Das Karam Chand). He lost his father before he was 12 and had to be looked after and educated by his elder brother who drew a meager salary of Rs 40 per month. The family moved to Lahore where Hans Raj joined a missionary school. He was incensed by the slighting references to Hindu pantheism, worship of idols and caste prejudices by a Christian teacher. He did not know what to do about them till he heard Swami Dayanand's stirring appeal to rejuvenate Aryan Hinduism by going back to the Vedas which believed in one God, rejected idol worship and the caste system.

Though born in Gujrat and nurtured in Maharashtra, the Arya Samaj took deeper roots in Punjab. This was largely due to a band of devotees like Lala Lajpat Rai, Pandit Guru Dutt Vidyarthi and Lala Sain Das. Hans Raj who had passed his BA with high credits and could have easily got a job in government service decided to accept the headmastership of a non-existent school with no pay.

Hans Raj set up the first DAV school in 1886 in the memory of Swami Dayanand who had died three years earlier. Three hundred students were enrolled and classes began in a rented house. The seed had been sown in fertile ground and the sapling nurtured to good health by a man who put his heart, soul and worldly wealth (which was only himself) into the job.

He took classes in history, politics and religion. On Sundays he took the boys out to the banks of the Ravi and spent the day with them. He inculcated in them the ideals of "learning, piety and patriotism." Long before the word Swadeshi came into vogue, he took to wearing khadi kurta and pyjama and wrapped a loose turban round his head His office had no chairs: he sat on the floor with an old-style desk on which he wrote. The spartan simplicity of his life won him respect and affection of the rich and the powerful. When he asked for donations for setting up new schools or colleges, they opened up their purses.

Inevitably, DAV institutions were drawn into the freedom movement. Hans Raj's own son, Balraj was arrested on charges of sedition and sentenced to life imprisonment. Most of Punjab's nationalists were products of DAV. Apart from reviving interest in Hindu sacred texts, Hans Raj involved his staff and students in relief work in floods and earthquakes in different parts of the country.

Hans Raj kept a punishing schedule of work - from early hours of the morning to late in the night. It took heavy toll of his health. He believed in healing properties of waters of the holy Ganga and spent some days of the year in Hardwar. It was in Hardwar that he was taken seriously ill. He returned to Lahore and on medical advice went to Salogra near Solon to recoup his health. He came back to Lahore. He knew his days were numbered. He sought solace in prayers. His favorite mantra was Aum Vishwani Deva.

The end came on November 14, 1938 at 11 p.m. His sons, daughters, grandchildren and innumerable friends were around him. His body was brought to the DAV College. Thousands upon thousands of people from all walks of life and communities came to pay him homage. His funeral procession, which wound its way through Anarkali, was the largest ever seen. It could not be accommodated in the cremation ground; the final rites were performed on the banks of the Ravi. Hans Raj College in Delhi derives its name from this great son of India.